The cloud keyframer is updated from Environment.

Some CloudKeyframe properties are used as per-keyframe values to generated the cloud textures. These textures are then interpolated for rendering:

Clouds are usually drawn to a lower-resolution buffer. The CloudRenderer keeps the cloud volume textures up to date, and draws the clouds volumetrically.

The cosmic background texture is drawn first, at an orientation that corresponds to the plane of the Milky Way galaxy - see SetBackgroundBrightness.

It uses a plate-carree projection, aligned with the galactic horizon. Given the vector “view”, which is the direction in galactic co-ordinates, the calculation is: 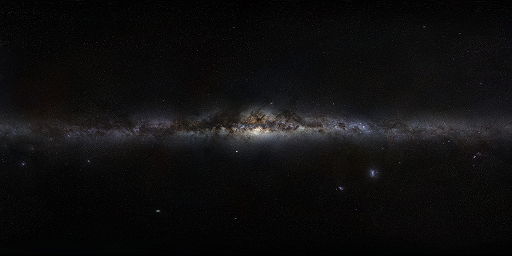 Stars are drawn as point sprites, and turn around the axis of the Earth’s rotation, in the same direction as the sun. Stars are usually drawn to the highest-resolution buffer (i.e. the main or final frame buffer or render target). See StarBrightness and MaxStarMagnitude.

The sun is drawn after the stars, also to the main buffer.

Planets (e.g. the Moon) are drawn by BaseSkyRenderer. A planet texture map can be supplied, and the shader takes sun direction as a parameter - this is used to light the planet (e.g. phases of the moon). Like stars, planets are usually drawn to the main buffer.

The sky and atmospherics are drawn to a volumetric texture for which the x and y axes are screen coordinates, and the z axis is distance.

The final compositing step puts the sky, atmospherics and clouds to the current rendertarget.

Rendering performance is mostly dependent on the number of pixels drawn, and the level of cloud detail. Calculation performance - mainly cloud lighting - depends strongly on the grid size - the larger the grid, the more time will be taken to light a cloud subdivision.

It is usual to downsample the cloud part of the sky rendering, controlled by MaximumCubemapResolution in the CloudRenderingOptions.

Go to the performance page to learn more about how to monitor trueSKY’s performance, along with ways to improve it.

The precipitation is used to control the amount of rain or snowfall at a given time, whilst the PrecipitationThresholdKm property is used to set the thickness of cloud required for rain to fall (setting this to 0 will allow even the smallest of clouds to produce rain). To switch between snow and rain use rain_to_snow (where 0 is rain, 1 is snow).

Each cloud keyframe has a PrecipitationRegion, which defines the local area of precipitation, if it is not global for the keyframe. The amount of particles used for precipitation can be altered with the MaxParticles property. 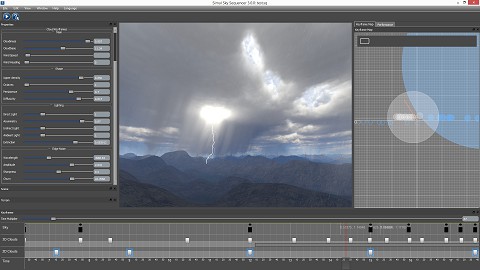 Classes derived from simul::clouds::BasePrecipitationRenderer are used to draw the rain or snow particles, while the link simul::clouds::PrecipitationRegion rain streak effectendlink is drawn by the cloud renderer. This class has a property “UseSimulationTime” which determines whether rain and snow speed is based on the simulated time-of-day, or real time in seconds.

trueSKY uses effects for rendering. An effect is a collection of shaders - vertex shaders, pixel shaders and so on, along with information on how to combine them, how to set render state when they are used, and what inputs they take.

TrueSKY’s cloud rendering is usually performed at below the full resolution of the screen. This is because, as a raytracing system, its performance is highly dependent on the number of pixels drawn.

Clouds and other volumetric effects can be blended with the full-resolution scene, optionally taking into account MSAA anti-aliasing. To do this, trueSKY uses a mixed-resolution compositor. 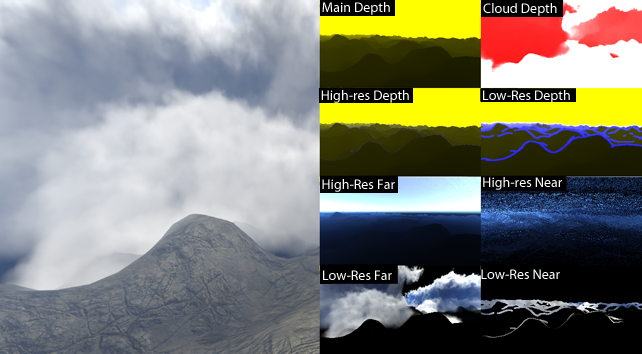 The depth values passed to the weather renderer in your depth texture are processed to obtain the needed information for the compositing. This processing uses the projection matrix passed in in your DeviceContext object. The most efficient projection is usually the depth-reversed style, for which the far plane is at z=0.